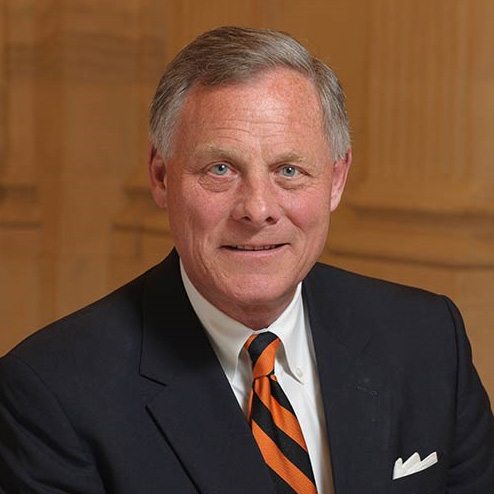 First elected to the U.S. House of Representatives in 1994, Senator Burr served five terms in the House and is currently serving North Carolina in his third term in the U.S. Senate. During his time in the House, he led legislation modernizing the U.S. Food and Drug Administration (FDA), and began his work to improve our nation’s
biodefense and pandemic preparedness capabilities.

In the Senate, he serves as Ranking Member of the Health, Education, Labor, and Pensions Committee. Promoting innovation in America’s health care system has been a priority for him throughout his time in Congress. Senator Burr has led on a number of significant legislative priorities, including the creation of today’s pandemic response framework through the passage and reauthorization of the Pandemic and All-Hazards Preparedness Act (PAHPA), improving FDA’s ability to regulate cutting-edge treatments for patients, and consistently championing funding for medical innovation and research.

Protecting and honoring human and civil rights is another area where he has led legislatively. Senator Burr spearheaded the passage of the Stephen Beck, Jr. Achieving a Better Life Experience (ABLE) Act. This legislation allowed for individuals with disabilities to save money in their own name without losing critical benefits, including health care. In 2014, the ABLE Act was signed into law, and was widely regarded as the most significant legislative accomplishment for individuals with disabilities since the passage of the Americans with Disabilities Act (ADA). In 2016, he worked with the late civil rights leader, Representative John Lewis (D-GA) to reauthorize the Emmett Till Unsolved Civil Rights Crimes Reauthorization Act. The passage of this bill provided a critical opportunity to right the wrongs committed against African Americans that were never investigated during the Civil Rights Era.

In addition to leading Republicans on the HELP Committee, Senator Burr also serves as a senior member of the Select Committee on Intelligence, the Finance Committee, and the Special Committee on Aging.

The son of a minister, Senator Burr and his family moved to Winston-Salem, North Carolina when he was a young child. He attended Wake Forest University on a football scholarship, and after graduating, he began his career far from the halls of Congress by spending seventeen years in business with Carswell Distributing, a wholesale commercial products company.

He also serves as a Board Member of Brenner Children’s Hospital and on the West Point Board of Visitors. Senator Burr and his wife, Brooke, have two sons.